DIY Halloween Costumes: The Best Of

Happy Halloween!  I have no exciting plans this year but I thought it would be fun to share some of my better DIY Halloween costumes from previous years. 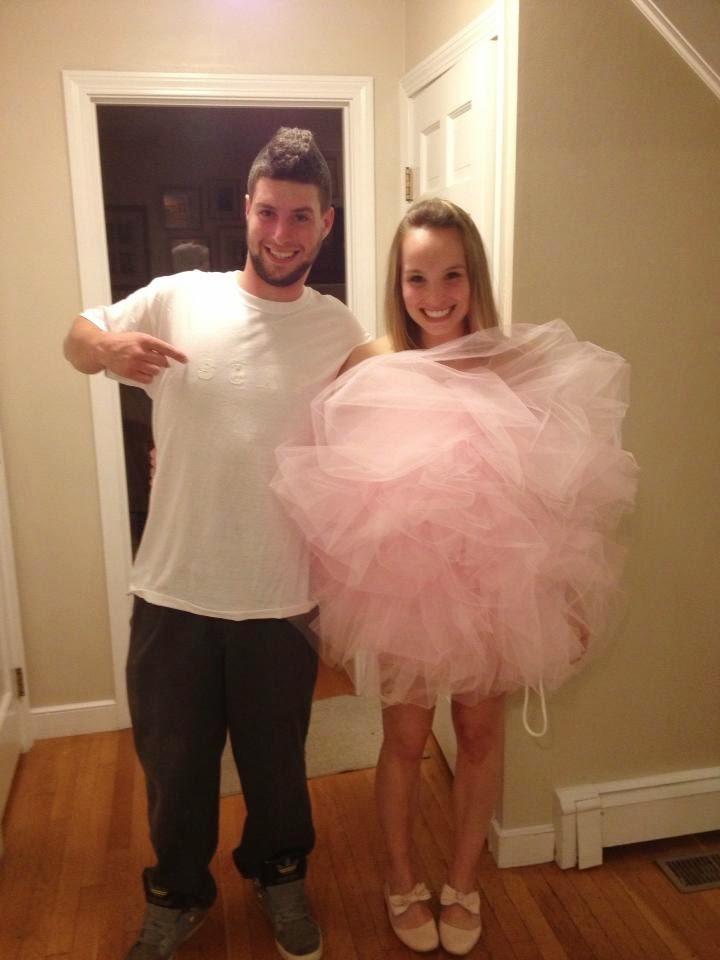 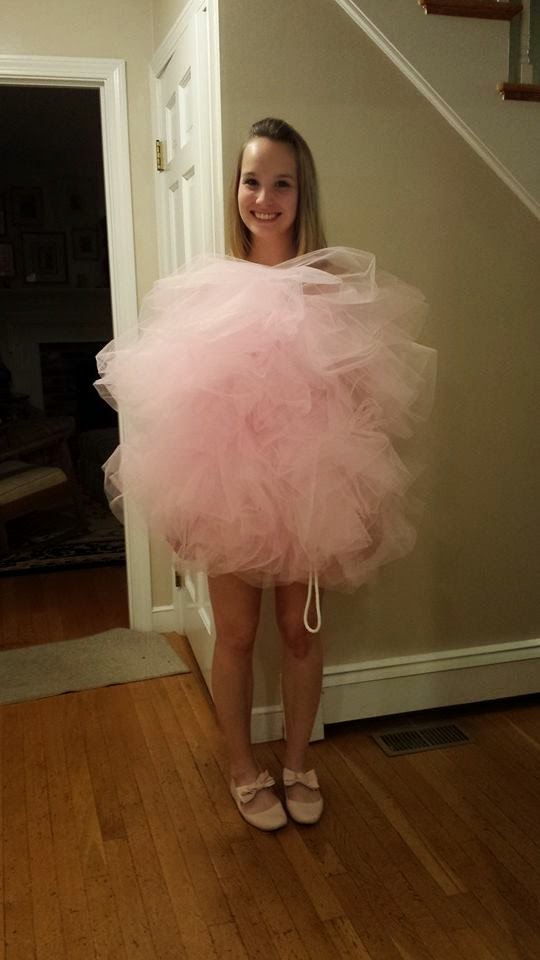 My boyfriend Bruce (the one I crocheted a hat for) was soap on a rope and I was an adorable - if I do say so myself - loofa.  I used the leftover tulle from my Design Wars/Project Pink Competition Entry dress to make this costume.  I ended up having to buy more, which sort of defeated the purpose, but my costume was wicked cute, so whatever.  And I bought a home dec trim from Jo-Ann Fabrics to use as the loofa string.

For Bruce's costume I ironed white SOAP letters onto one of his white t-shirts and he tied a rope around his waist.  He actually wore that shirt around for months after Halloween and it just looked like a plain t-shirt.  Not much of a costume, but pretty practical in the long run.

I ended up leaving my giant loofa costume in the back seat of my car for months until Bruce finally took it to the dump. 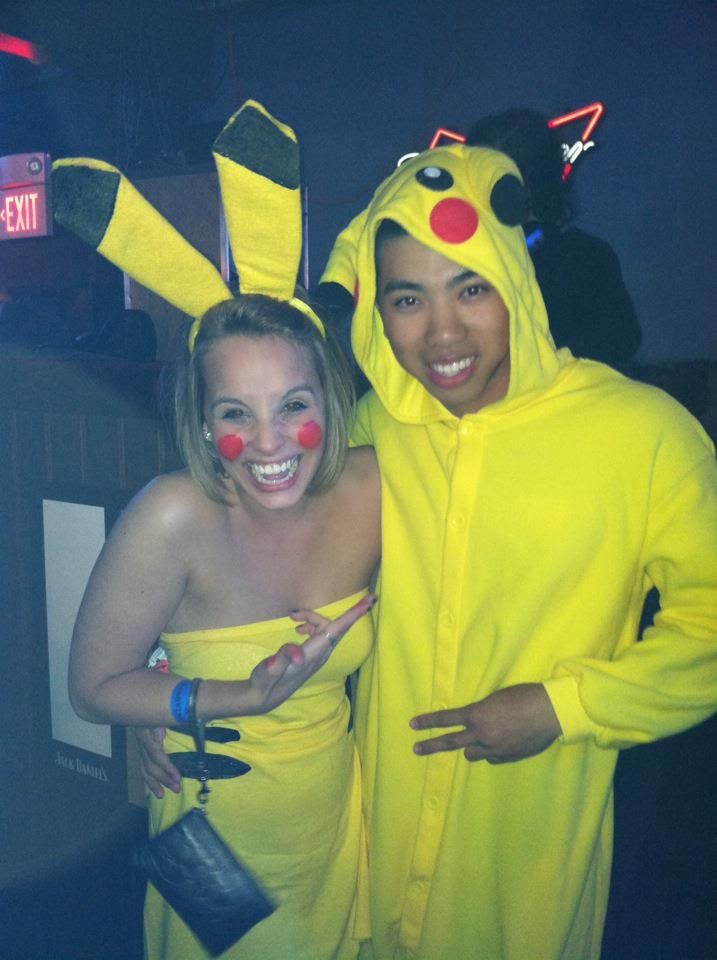 I bought a men's large t-shirt, stuck my shoulders through the neck, and tied the sleeves in the back to make the dress.  (I learned that at college; the sorority girls would do that with their Arizona shirts for football games.  It makes a pretty flattering dress.  I wore a pink version of this dress under my loofa costume from 2013.)  I made the Pikachu ears using bunny ears from a party store.  I cut off the fluff and covered them in felt.

And I even found another Pikachu at the bar!  He said his costume was better because his had a tail but, let's be real, I was way cuter. 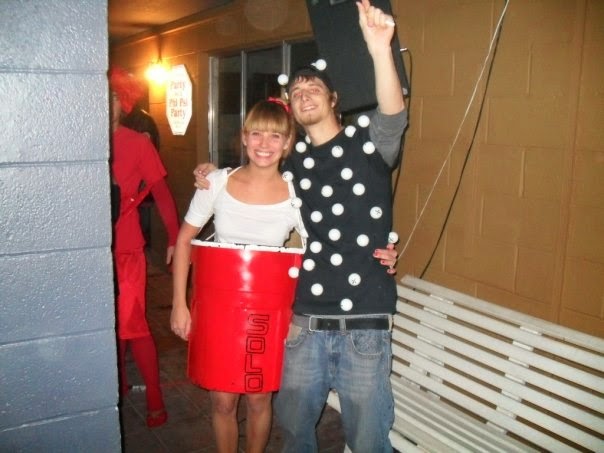 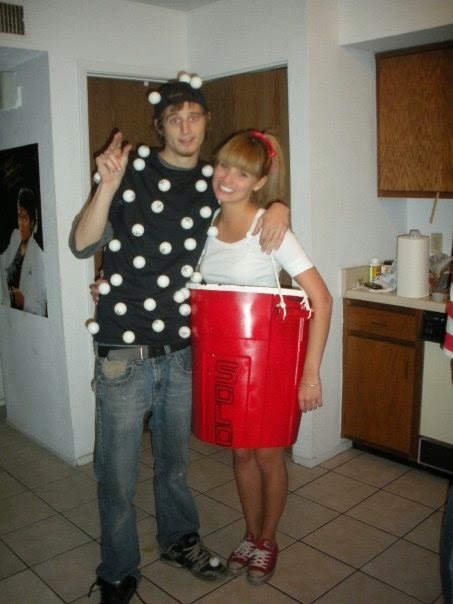 I was a red solo cup and my friend was ping pong balls and together we were beer pong.  This was probably my most labor intensive Halloween costume ever.

I bought a trashcan, spray paint, and a rope at Home Depot.  I got a frat guy to cut off the bottom of the trash can with an electric saw, I spray painted it red, used some white acrylic paint laying around the sorority house for the trim, used Sharpie for the lettering, and tied the rope to the trash can handles.  People threw trash at me all night.  It was terrible.

I guess I really like Pokemon costumes.  I made this all by myself, hence the terrible artwork.  (Which hasn't improved much in the past 15 years, by the way.)  I wore a sweet poster board sandwich board type thing.  It was awesome. 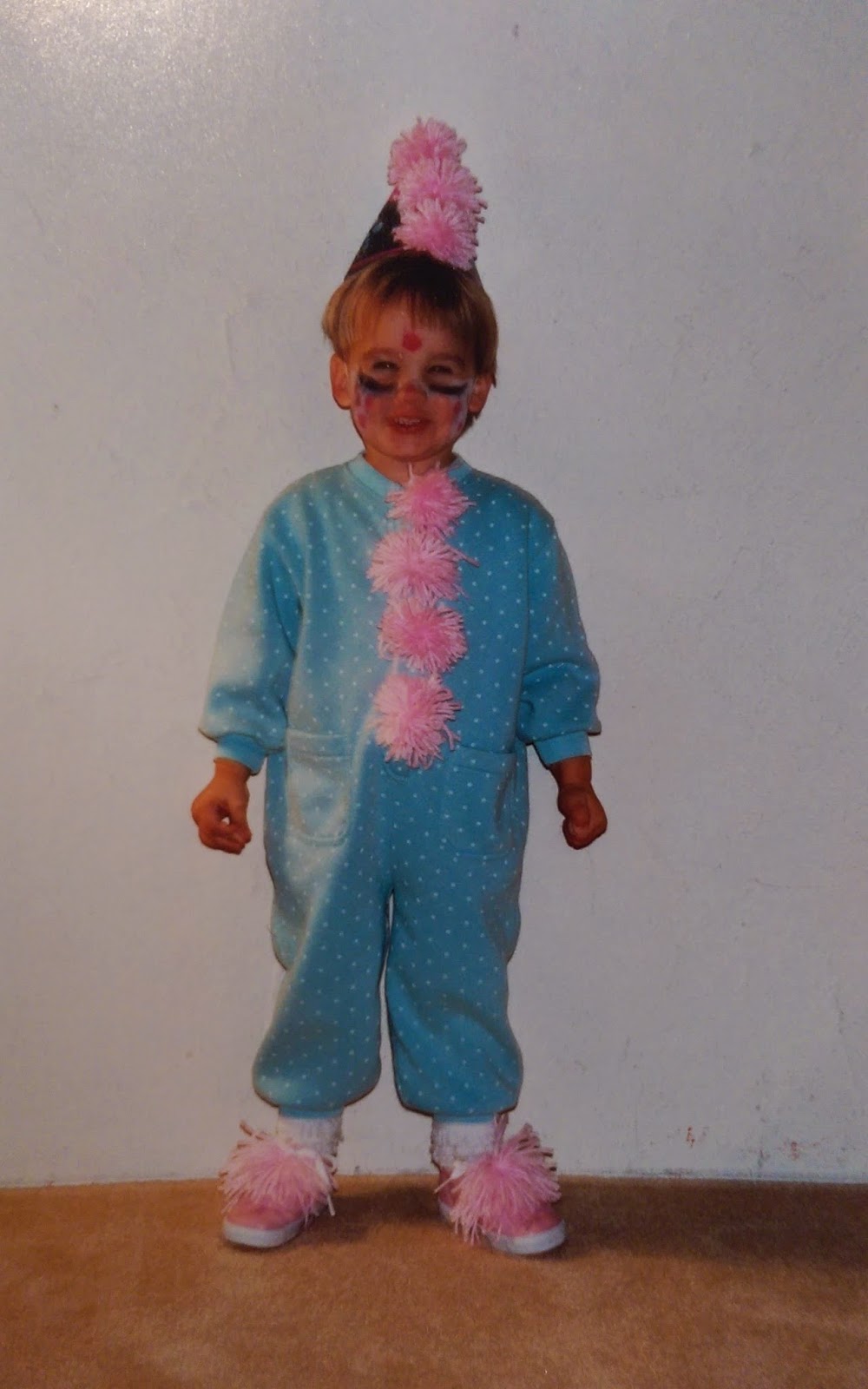 My first Halloween.  To be fair, my mom is the one who "made" this one.  As in, she made a few pom poms and attached them to my onesie pajamas, shoes, and a BIRTHDAY HAT.  Mom...what???  Who just has a spare birthday hat laying around?  And that face paint is truly bizarre.

I wish I had better photos of my costumes, because they were pretttttttty sweet.  I'm not dressing up this year, but hopefully next year Bruce and I will have an awesome couples costume situation going on.

Speaking of Bruce, my next post contains some exciting news...
Posted by Alison Esther at 7:39 AM No comments:

I am the worst blogger ever.  It has been almost two months since my last post.  Although I have been very busy...Details and exciting news in my next post!

So anyway, last spring I entered a competition at school where students had to design and sew a garment using surgical blue wrap from a local hospital.  I won Most Wearable!  The competition entries were on display at the school library for Earth Week.

The blue wrap is a stiff bonded fabric that doesn't fray, which is why I decided to design something with scallops.  I didn't need to worry about facings or anything and the stiffness of the blue wrap held the shape of the scallops well.  The blue wrap can't be ironed, so it would have been impossible to sew the scallops in the traditional way with facings and linings and whatnot. 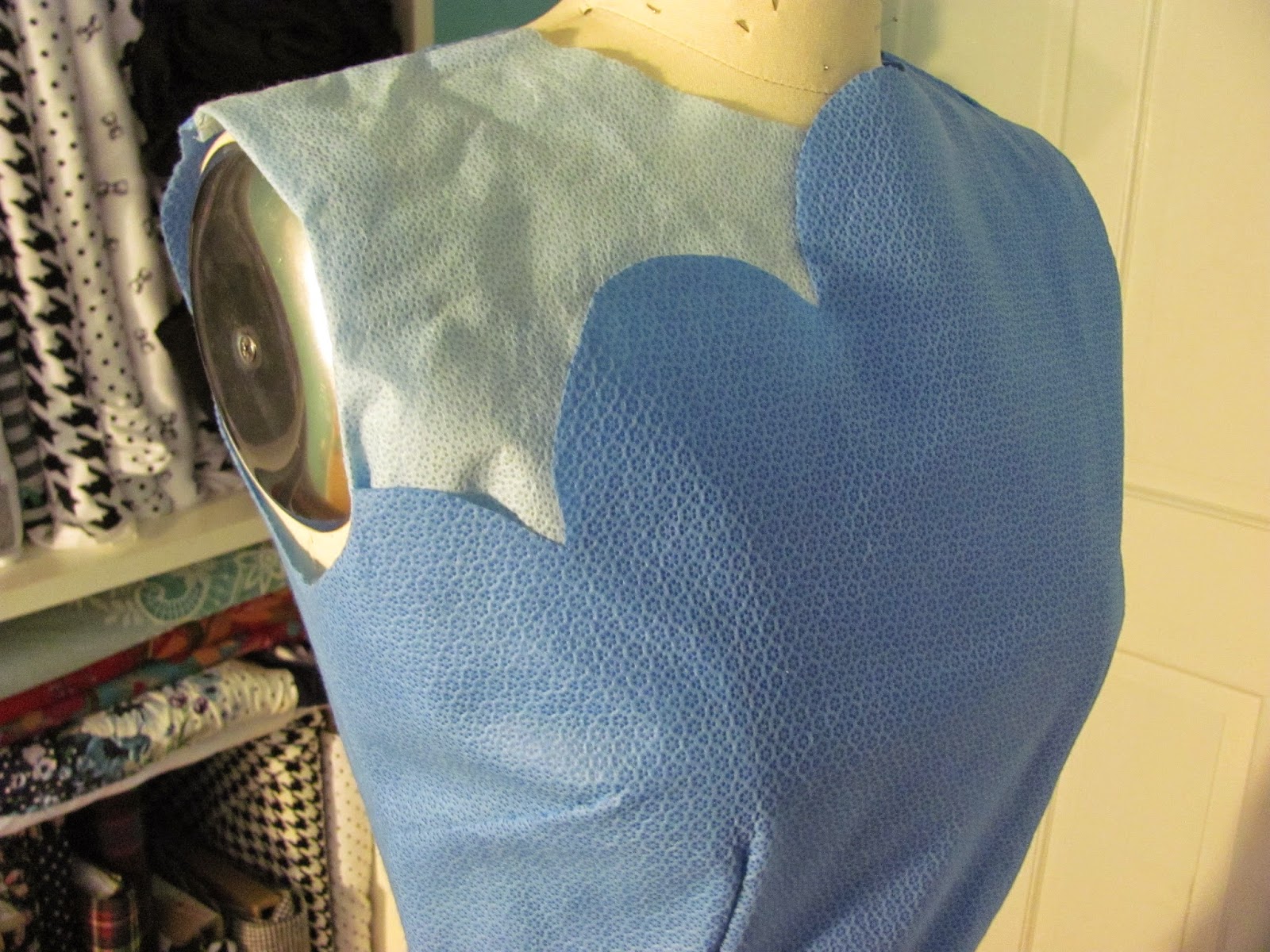 I used the pattern from my Colorblocked Shift Dress as a starting point for the bodice of this dress.  I took the pattern in at the waist and I drafted a basic two-dart pencil skirt for the light blue underskirt.  For the scalloped skirt overlay, I closed out the waist darts, which added some flare at the side seams to give it an a-line shape.  Here's a shot of Sox with my pencil skirt pattern pieces:


I also used the scallop pattern piece from my Colorblocked Shift Dress as the stencil for the scallops on this dress. 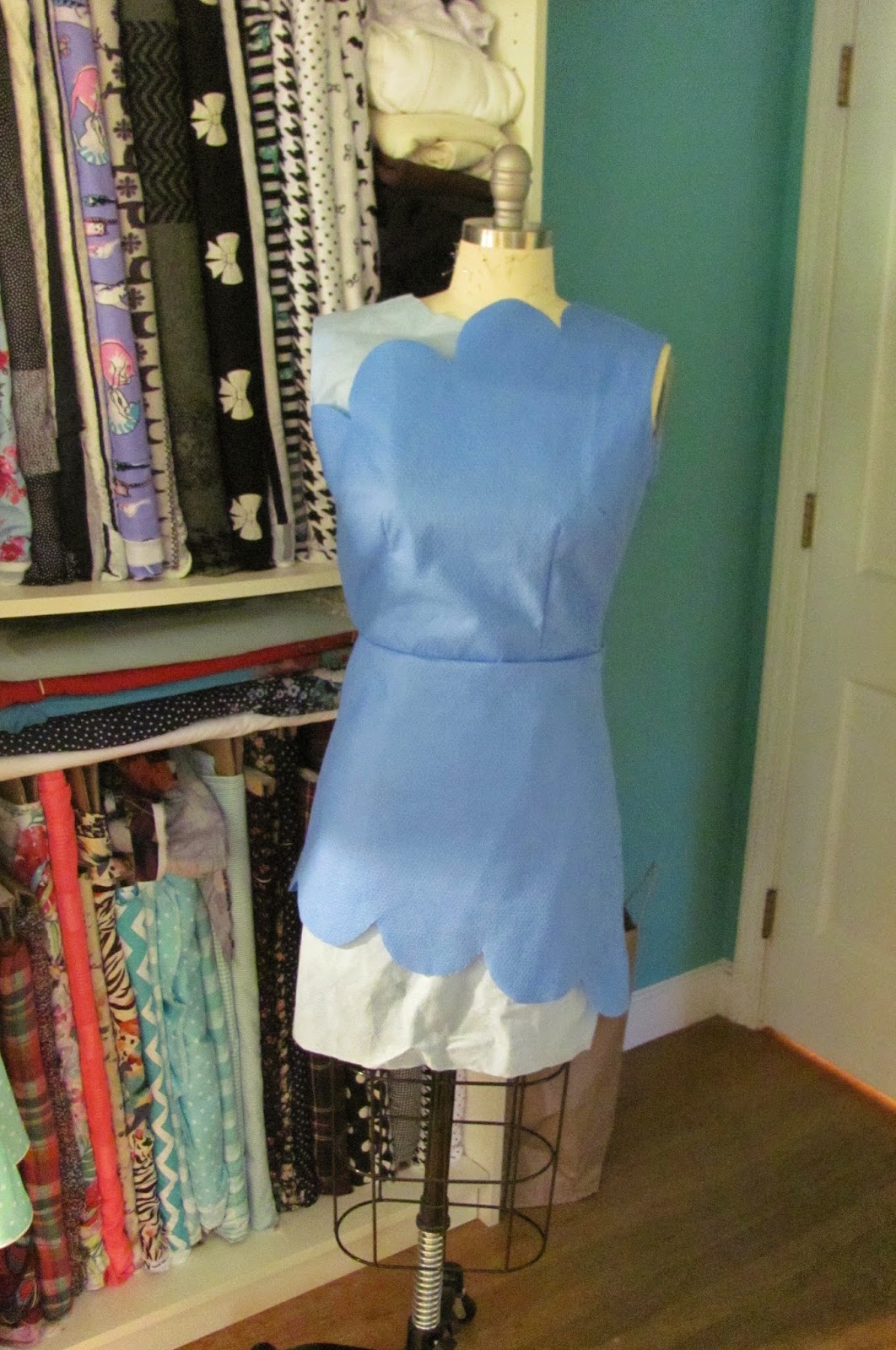 I winged it a lot with this project and it worked in my favor.  I sort of just threw the scallop pattern over the bodice front and traced the shape.  I did the same for the back.  Usually I overthink things and focus too much on details and on doing things "the right way" and I think my projects would go more smoothly if I winged it a little more. I got the scallops on the skirt to line up perfectly at the side seam with barely any work.  I think I would have been unsuccessful if I had worried about the scallops too much. 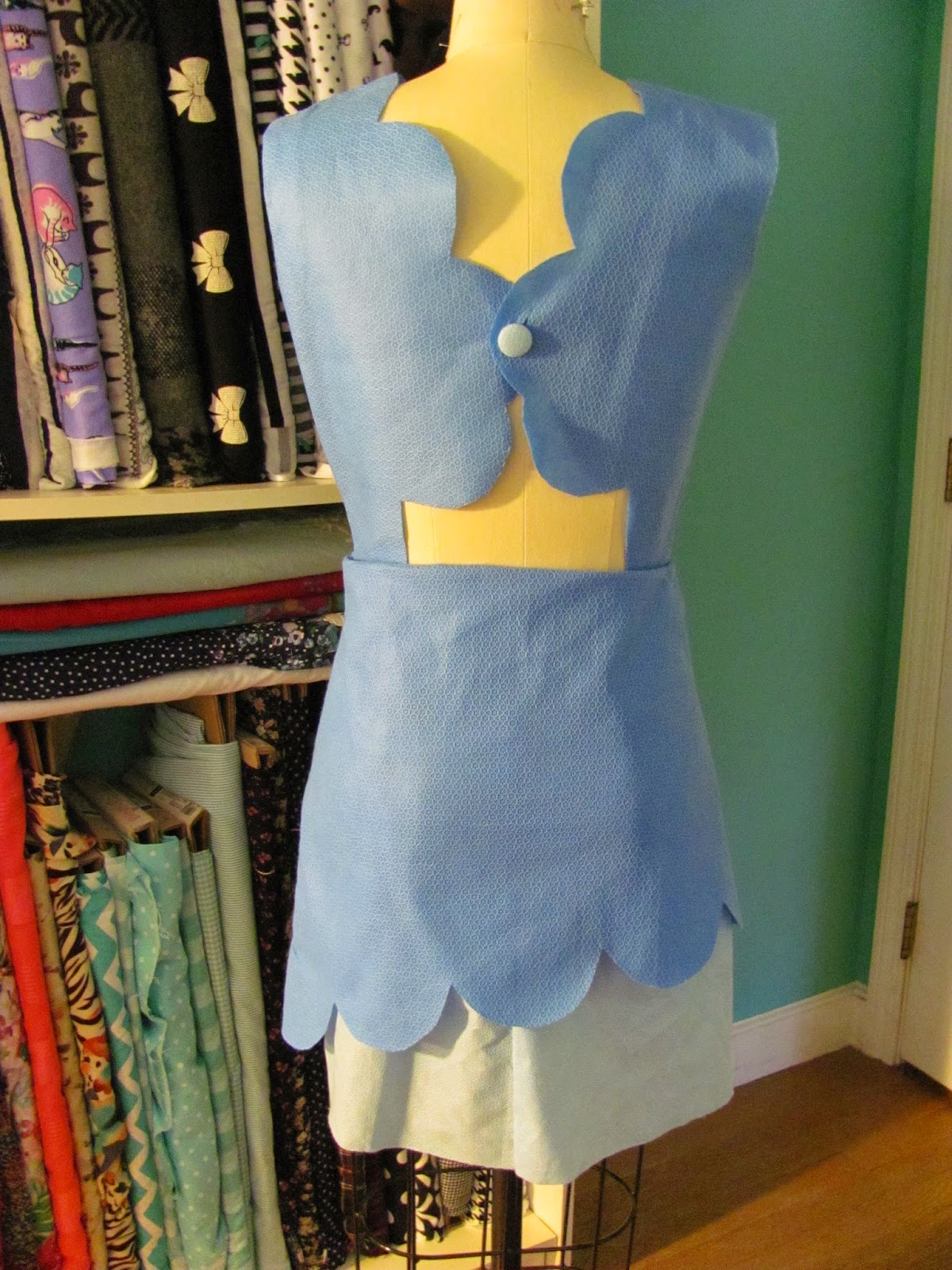 I used facings to finish the armscyes.  Side note: this is not a perfect zipper because I had to re-cut that back piece and I had to pull out the zipper and sew it back in.  It was a whole thing. 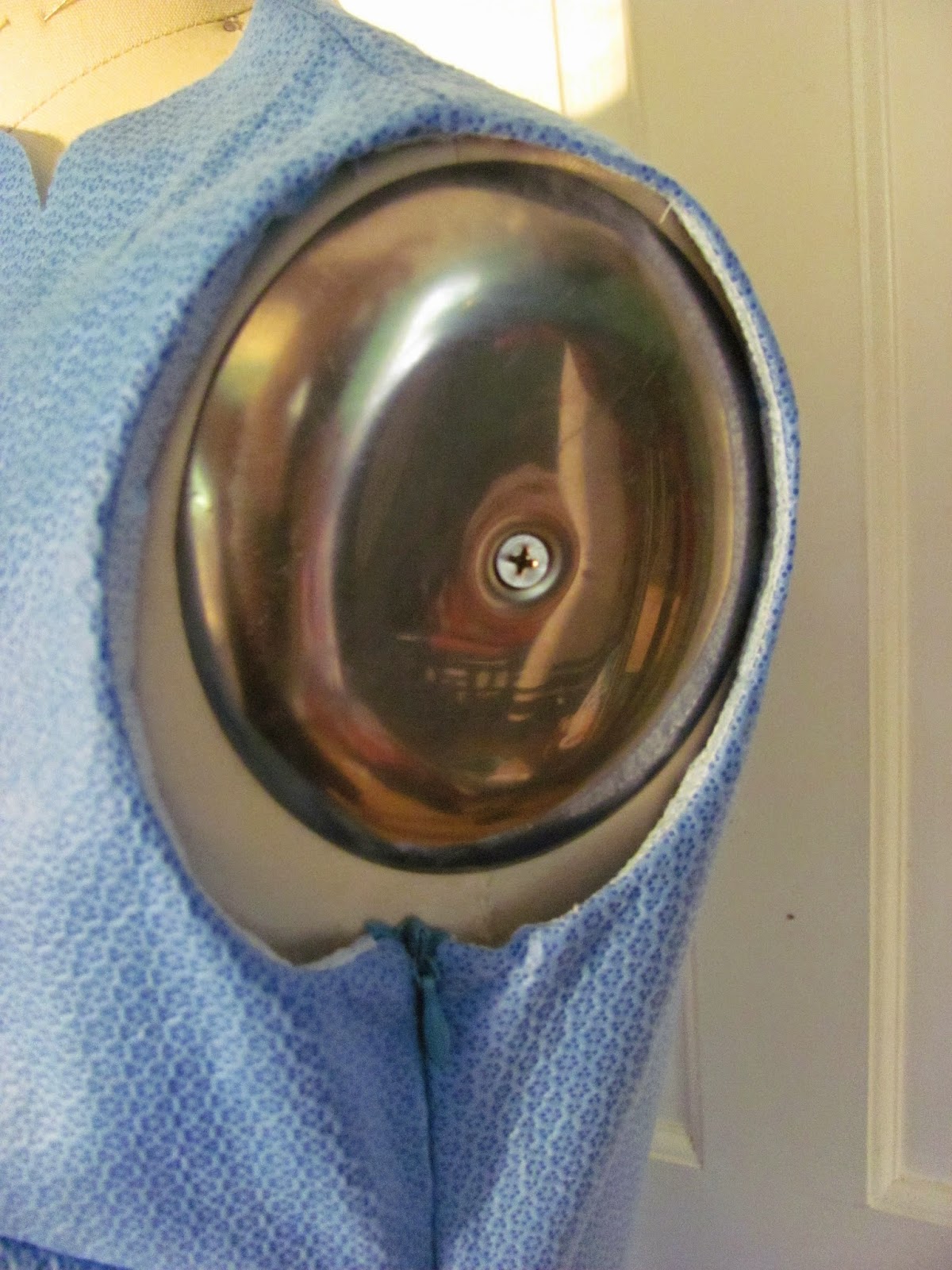 But look at how perfectly the scallops line up at the side seam! 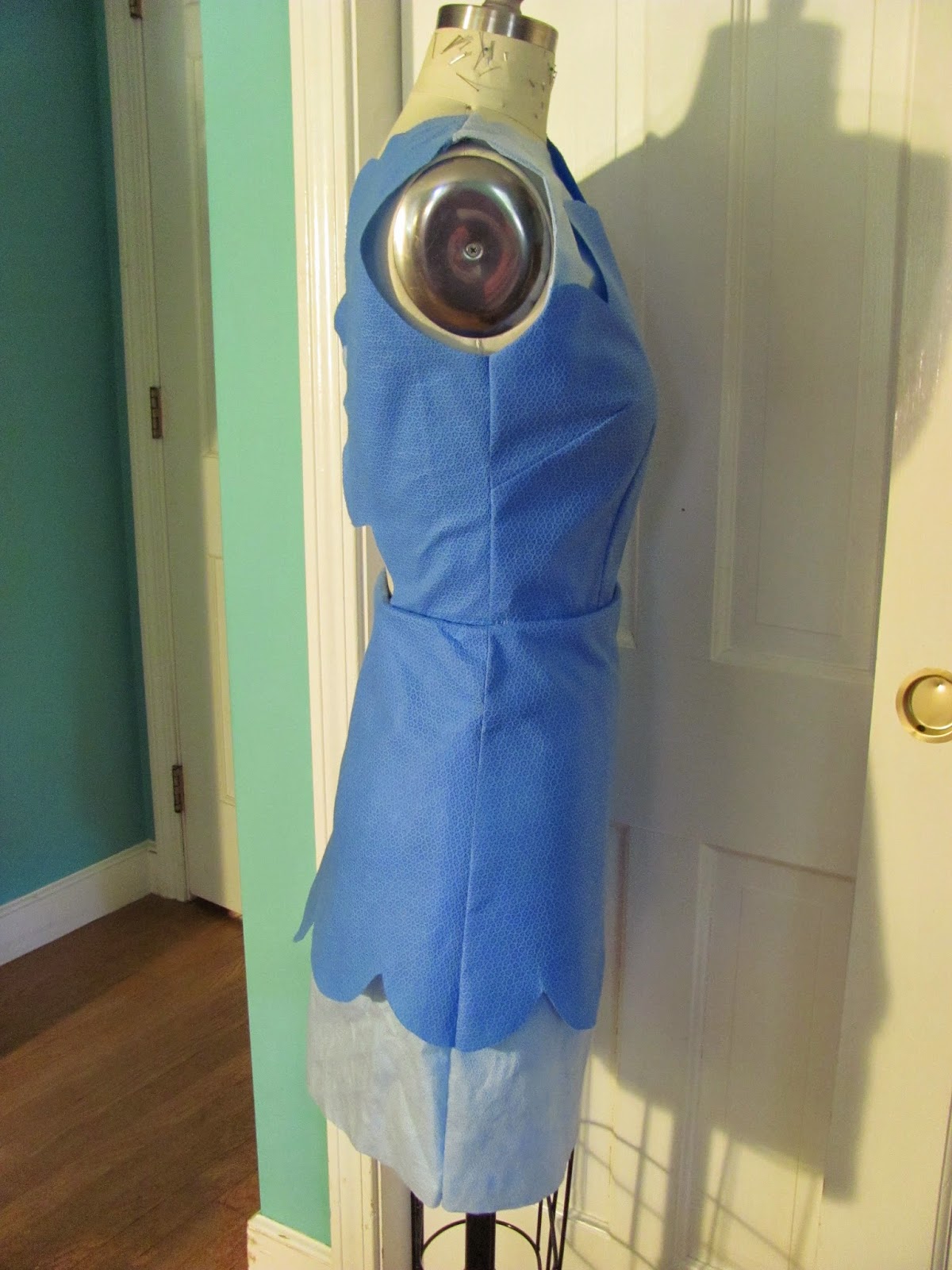 I made a little slash with an exacto knife for the buttonhole on the back and covered the button with the light blue wrap.  The back waist looks crooked, but that's just the way it's sitting on the dressform.  I had issues with the bodice back pieces bunching and sitting oddly and I was on a deadline and didn't have time to fool around with it too much, so they aren't sewn to the skirt. 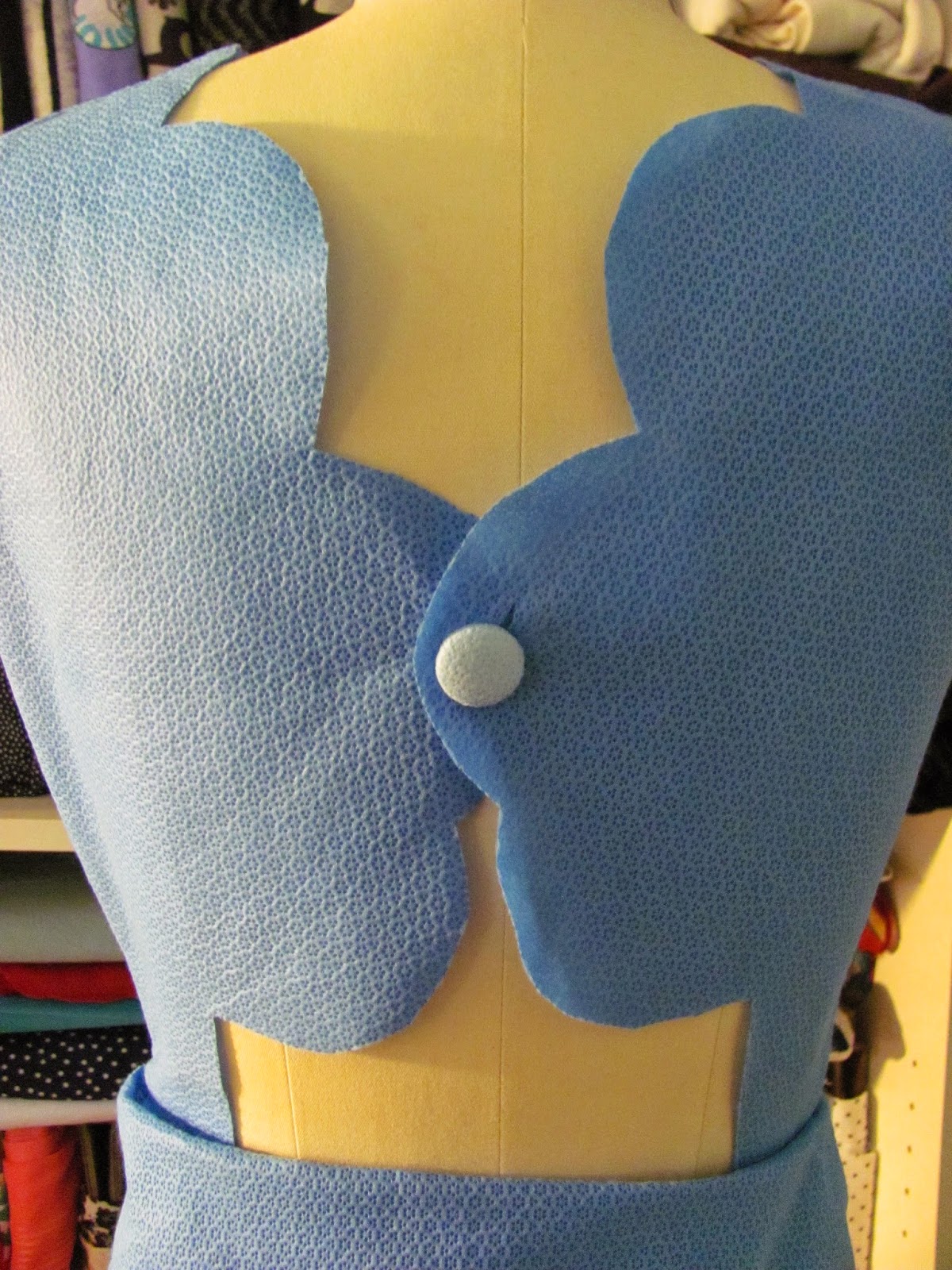 Sox was adorable - per usual - and made a fort out of the blue wrap:

I just realized I never blogged about my dressform.  I got it a year ago when I was taking Draping at school.  I got it from The Shop Company.  I was going to post about it to let the other sewing bloggers know about the high quality and affordability of the dressforms and then I forgot.  And then a bunch of other bloggers got The Shop Company's dressforms like six months later and there were all kinds of coupon codes on their blogs.  Boo. 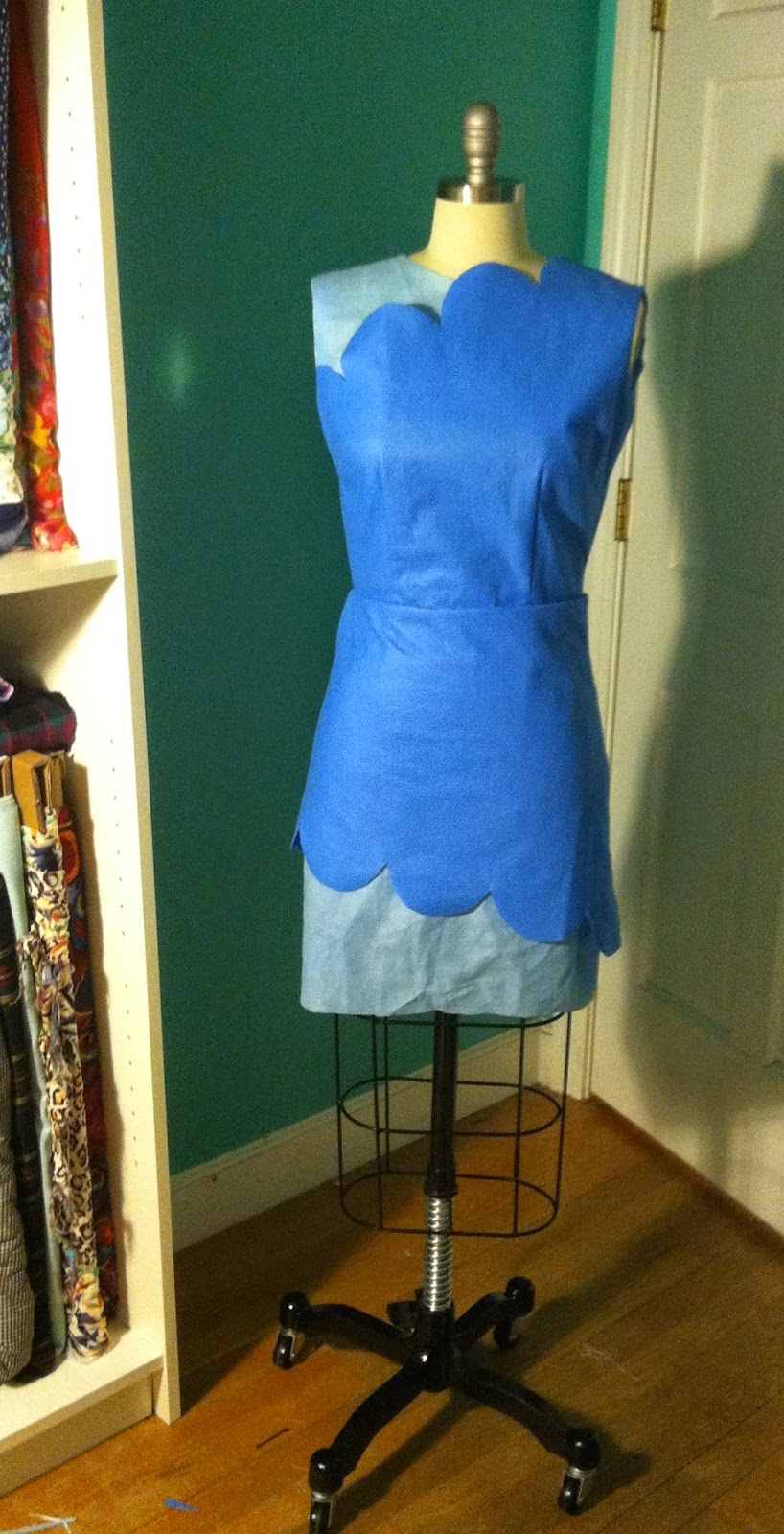 Alison Esther
I knit, crochet, sew and have a big fluffy cat named Sox (after the Red Sox) who likes to help me with my crafts. I graduated from the University of Arizona in May 2011 with a B.A. in Journalism and I studied Fashion Design at Framingham State University in Massachusetts for two years. I now live in Lemoore, California with my husband who is in the Navy.